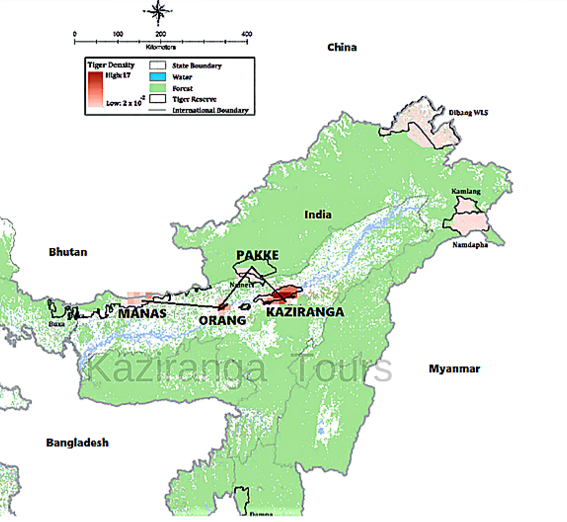 About the National Parks you will visit

​​​Manas National Park, a UNESCO Natural World Heritage site is located in the India Bhutan border. A part of the Eastern Himalayan foothills this wildlife park is in the state of Assam in Northeast India and is contiguous as Royal Manas National Park in Bhutan. It is a project tiger reserve, elephant reserve and biosphere reserve. The fauna of the sanctuary include Indian tigers, Indian leopards, clouded leopards, Asian golden cats and black panthers, apart from Indian elephants, Indian rhinoceros, gaurs, Asian water buffaloes, barasingha, dholes, capped langurs, golden langurs, Assamese macaques, slow loris, hoolock gibbons, smooth-coated otters, sloth bears, barking deers, hog deers. The park harbours more than 22 endangered species which are designated as Schedule 1 species in the Wildlife Protection Act and enjoy the highest level of protection. Manas is famous for its unique scenic beauty and to quote the UNESCO World Heritage Tag declaration – Manas contains superlative natural phenomena/ areas of exceptional natural beauty and aesthetic importance. It is also designated as an Important Bird Area with more than 500 species of birds. More than 200 species of butterflies have been recorded at Manas.

​Pakke Tiger Reserve, is a Project Tiger reserve in the Pakke Kessang district of Arunachal Pradesh in northeastern India. The 862 sq km (333 sq mi) tiger reserve has won India Biodiversity Award 2016 in the category of 'Conservation of threatened species' for its Hornbill Nest Adoption Programme. It is bounded by Jia Bharali or Kameng River in the west and north, and by Pakke River in the east. Three large cats are found here - the Bengal tiger, Indian leopard and clouded leopard along with many other animals like jungle cat, wild dog, asiatic jackal, Himalayan black bear, binturong, elephant, gaur, sambar, hog deer, barking deer, wild boar etc. The commonest monkeys are the Rhesus macaque, Assamese macaque and the capped langur. Almost 300 bird species and 1500 butterfly species are recorded here.

Kaziranga National Park is famous for the one horned Indian Rhinoceros. A UNESCO world heritage site it has the highest density of the Indian Rhino. The One Horned Rhinoceros, Royal Bengal Tiger, Asian elephant, Wild water buffalo and Swamp deer are collectively known as 'Big Five' of Kaziranga. Kaziranga is one of the few wild breeding areas outside Africa for multiple species of large cats, such as Bengal tigers and leopards. Kaziranga was home to the highest density of tigers among protected areas in the world, and was declared a Tiger Reserve in 2006 (one per five km2). Other felids include the jungle cat, fishing cat, and leopard cat. Kaziranga has achieved notable success in wildlife conservation and is home to hundreds of species of animals and birds including many endangered species.

The Park is the abode to more than 70% of One Horned Rhinoceros in the world. Highest density of tigers’ prey including the large prey biomass of tiger found in the country. Harbours more than 60% of India’s wild buffalo population along with the only population of the Eastern Swamp deer and seven species of turtles and tortoises.

Kaziranga is home to 25 Globally Threatened and 21 Near Threatened species of birds. So far 480 bird species have been identified and recorded in the Park. The Baza, Bengal Florican, Hornbills, Osprey etc. are the endangered species. There is also presence of Pelicans and various waterfowls both resident and migratory.​​​

Guests need to arrive in Guwahati, the major city in the region which is well connected with all the big cities in India by air and train. Guests will be picked up from Guwahati and journey will start from there. They will visit the Manas National Park and Orang National Park in Assam and thereafter proceed to Pakke Tiger Reserve in Arunachal Pradesh. The last destination will be Kaziranga National Park in Assam and the guests can fly back from either Jorhat airport or Guwahati airport. The tour can be customized as per the convenience of the guests.

​​​In search of Tigers in Northeast India

Tiger is the national animal of India. As per the latest tiger census report of 2018 there are an estimated number of 2967 tigers across India. Out of that 219 are from Northeast India in the states of Assam and Arunachal Pradesh. There has been a steady growth in the number of tigers in the region as given below :