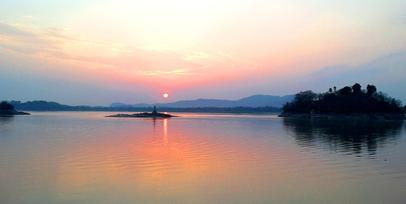 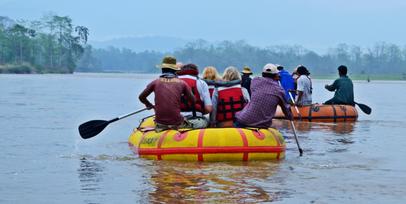 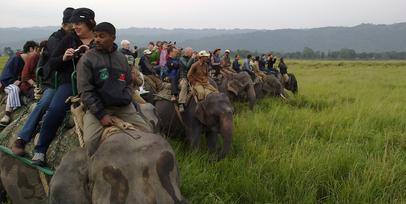 ​​​​Kaziranga National Park, a world heritage site is one of the most famous national parks in the world. It has more than half of the world’s population of one-horned rhinoceros. Located on the banks of the mighty river Brahmaputra in central Assam it also boasts one of the highest densities of tiger population.

Elephants, wild buffaloes, hog deer,  swamp deer, sambar , are also some of the animals that are found here. Kaziranga also has a large population of birds. One can find huge flocks of pelicans, rose-ringed parakeets apart from crested serpent eagles, gray-headed fishing eagles, red jungle fowl, Bengal florican, bar-headed geese, whistling teals and swamp partridges. The commonly found storks are black-necked, adjutant and open-billed. Egrets and herons of almost all types can be spotted sitting on the peripheries of water bodies fed by the Brahmaputra.

The actual credit for launching the rhino conservation campaign in Kaziranga goes to Lady Curzon, the wife of the then Viceroy of India. On her visit  to Kaziranga, she was disappointed as she did not see any rhino. This led her to persuade her husband Lord Curzon to save the animal from total extinction. Lord Curzon declared an area of 57,273 acres of land as reserve forest on 1st June, 1905. In 1908 it was officially designated as Reserve Forest and in 1916 it was declared as a game sanctuary. In 1938 its name was changed to Wildlife Sanctuary and was opened to visitors. Finally in 1974 it was called as 'Kaziranga National Park'.

Kaziranga National Park also got inscribed on the World Heritage List of Convention concerning the protection of the world cultural and natural heritage in the year 1985. From less than a dozen to more than a thousand, rhino conservation in Kaziranga is a real success story in a world of rapidly dwindling wildlife and something that is to be seen to be believed

​How to reach Kaziranga National Park

Kaziranga (Kohora) to Guwahati 220 km, Jorhat is 100 km, Tezpur is  90 km.
Kaziranga is located on National highway no 37 or AH 1 and so is well connected to all the major towns of Assam.

It is essential for visitors to take prior permission from the Forest Department before entering the park.

Visiting Hours in the Park

The safari is for one hour. Tickets for the elephant safari need to be obtained the previous night from the Forest dept. There are two Elephant Safari points in the Kaziranga National Park, one at the Central (Kohora) Range and another at the Western (Bagori) range. At safari at the Western range is operated by private operators and so foreign tourists are not allowed there.

Each of the circuit takes about two hours (or even more depending upon interest of the tourists). No private vehicles are permitted inside the Park.